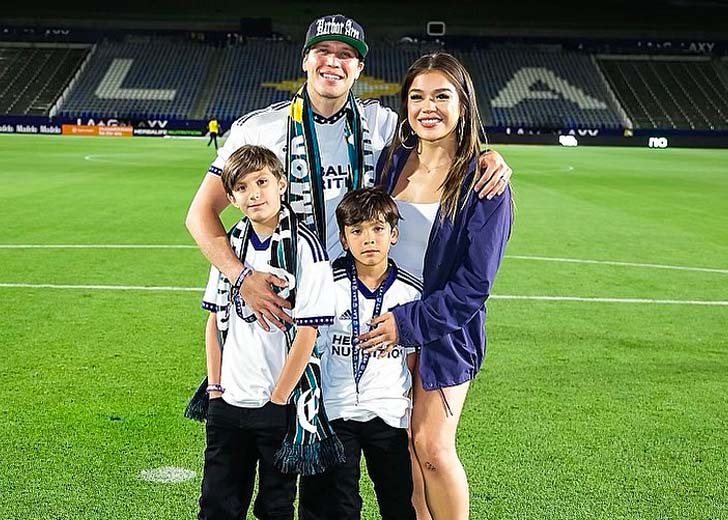 Brian Ortega has two kids from his former marriage.

Brian Ortega is an American professional mixed martial artist who currently fights in the Featherweight division in the Ultimate Fighting Championship (UFC).

He has also participated in the Resurrection Fighting Alliance, where he was a Featherweight Champion. He is number 3 in the UFC featherweight rankings as of July 18, 2022.

The fighter is the recipient of the World MMA Awards for the category 2017 Breakthrough Fighter of the Year and 2021 September Fight of the Month. So far, he has fought 19 matches, out of which he has lost only three times.

Moreover, Ortega’s current girlfriend, Tracy Cortez, is also a UFC fighter and a creator from Mexico. Fans adore the couple and are curious to know how it all started.

First Sportz reported that Ortega and Cortez got acquainted after a flirty exchange on Instagram.

In one of Cortez’s Instagram posts, the LA-based boxer reportedly commented, “[expletive] it, ima shoot my shot.”

Fast forward to the present, and the couple has now been dating for over a year.

Similarly, they have a common ethnic background as both are of Mexican background.

They also recently bought a home on January 26 — Ortega posted a picture of himself and her girlfriend in front of a new house and bragged, “Dreams do come true. New house but you make it home.”

The MMA artist is very supportive of his girlfriend. He can be seen supporting his girlfriend during the matches. Sharing a picture of them on Instagram, Ortega once wrote a sweet message, “Tonight is your night babygirl time to shine and do what you were put on this earth to do.”

Cortez posted a picture of her passionately kissing her boyfriend, Ortega, on July 16, 2022. And fans took a closer look and found a shiny ring on her finger.

An Instagram user under the handle @laura_sanko commented on the post, saying, “Girl! That ring is a [love-eye emoji]. Tell me I am not making stuff up.”

Cortez responded, “I said yes.” While some fans congratulated her, the other followers were not convinced and even doubted that he would ruin the relationship in the future.

Brian Ortega has two kids from his previous marriage

Ortega is a father of two beautiful sons from his previous marriage with his ex-wife, Stephanie Roberts. Before his relationship with Cortez, he was in a long-term relationship with Roberts and got married at one point.

Although it is unknown how long they were together, their Facebook pictures date back to 2012. The reason for their breakup is unknown.

The last time they were seen together on the frame was when Roberts shared a family picture with their two sons and Ortega during Christmas on December 25, 2014.

Cortez appears to be very affectionate toward Ortega’s sons, as the four of them spent Christmas last year together.