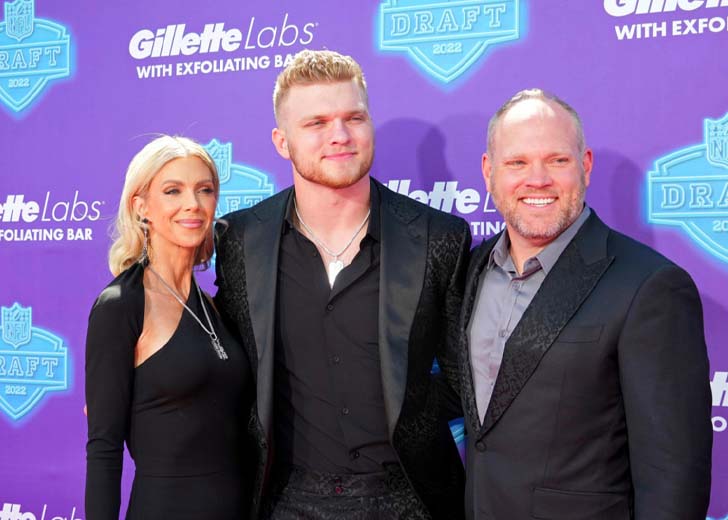 Aidan Hutchinson has considered his parents his number 1 supporters since day 1.

He attended Michigan University and played and earned multiple trophies as a senior in 2021, including the Ted Hendricks and Lombardi Awards and being named Heisman Trophy runner-up.

Aidan was selected second overall in the 2022 NFL Draft by the Lions. And as he rises to fame, fans are curious to learn about the rising star.

So here is everything you need to know about the young football star, his parents, family, and more.

Aidan was born on August 9, 2000, in Plymouth, Michigan, and is just 21-year-old. His full name is Aidan Joseph Bernardi Hutchinson, and his middle name honors his great-grandfather who served in the World War II jungle warfare force known as ‘Merrill’s Marauders.’

Scouts who looked into his history discovered that Chris and Melissa had a well-rounded youngster molded by a close-knit family that included two older sisters, Mia and Aria. Her sister Aria recently won the title of Miss Michigan 2022.

Mama Hutchinson, Melissa, according to AP News, is a former model who is now an artistic photographer.

The mother of three has been showing her work on her Instagram feed since 2016. She also regularly shares adorable photos on her personal Instagram account, many of which show her enjoying her son’s football games and her daughters at activities.

During his undergraduate career, Chris was a captain and an All-American defensive end for the University of Michigan.

Although he started his first season with the Cleveland Browns, Chris was forced to retire due to an unfavorable reaction to a tetanus vaccine. With his sports career over, he pursued his real passion: medicine.

According to SI, the NFL rookie confessed to MLink that the football star is living with his parents while attending the Lions’ offseason program.

Aidan also spoke with AP News ahead of the 2022 NFL Draft about how appreciative he is of his parents’ support — they are his number one supporter.

“With my parents, they’ve been my support system since Day 1 and having them at my back is so beneficial for me and my whole career,” Hutchinson told the AP.

“I know this transition is going to be difficult for the NFL. But having them, my sisters and my parents, I know they have all my best interest at heart.”

Aidan was a true freshman at Michigan in 2018 and appeared in all 13 games, recording 15 tackles.

He started all 13 games as a sophomore in 2019, earning 68 tackles and 4.5 sacks. He started the first three games of his junior season in 2020 before suffering a season-ending injury.

He further established the team’s single-season sack record at 14 as a senior in 2021.

He was also the Heisman Trophy runner-up, the only defensive player among three quarterbacks to be considered a finalist. Following that, he declared for the 2022 NFL Draft.