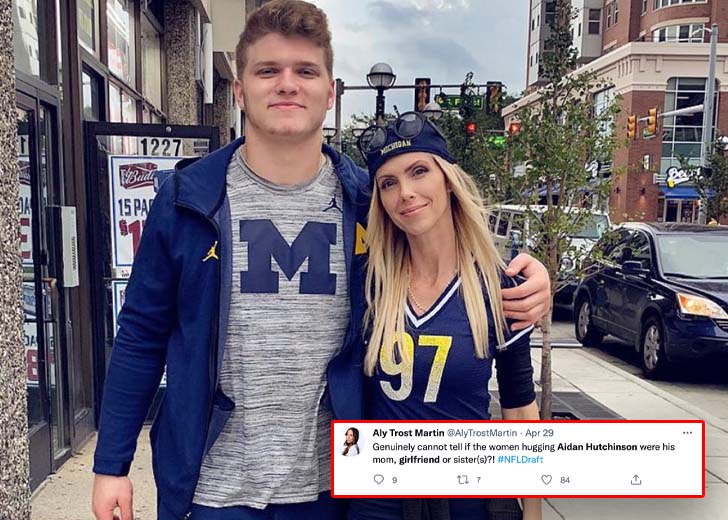 “Genuinely cannot tell if the women hugging Aidan Hutchinson were his mom, girlfriend, or sister(s)?!” someone tweeted.

Aidan Hutchinson’s mom became the talk of the show at the 2022 NFL Draft.

His mom Melissa Sinkevics, father Chris Hutchinson, and his two sisters were seen at the 2022 NFL Draft to support Aiden. The family overjoyed and embraced Aiden when he was picked by the Detroit Lions.

However, when the NFL player was seen with three beautiful ladies, fans who love the NFL star speculated that one of them might be his girlfriend.

Aidan Hutchinson’s mom was assumed as his girlfriend

Aidan’s mom, who accompanied her son, was assumed as the player’s girlfriend by the fans. When the mother happily hugged him after he was selected second overall by the Lions in the 2022 NFL Draft, his admirers were left in confusion.

His fans started tweeting on Twitter. One of them tweeted, “Genuinely cannot tell if the women hugging Aidan Hutchinson were his mom, girlfriend, or sister(s)?!”

The whole family, including his two sisters, went to the draft to support their brother, and all the ladies were time and again assumed to be his girlfriend. One of the tweets even said, “Aidan Hutchinson got 3 girlfriends???”

Aidan Hutchinson’s dating status: Does he have a girlfriend?

Footballer Aidan seems to be single and not dating anyone at the moment as there is no information of him being involved romantically with someone.

While the athlete is busy with his football career, fans have been inquisitive since he was selected by the Lions in the 2022 NFL Draft.

So, it might be good news for his admirers of Aidan that he does not have a girlfriend at the moment.

The NFL player has two sisters named Aria Hutchinson and Mia Hutchinson. Aria was crowned Miss Michigan USA 2022 at McMorran Place Sports & Entertainment Center, Port Huron, on May 28. She will be representing Michigan for the title of Miss USA 2022.

Aria, 23, is currently pursuing a degree in neuroscience at the University of Michigan. She is also the founder of the project InPower. The program focuses on yoga, martial arts, and meditation for victims of abuse and beyond.

Similarly, Mia is a digital creator and a photographer. She also handles the social media of her younger brother Aiden. Her work can be seen in miaphotography.

No wonder he got his athletic DNA from his dad. The father was a defensive tackle and outside linebacker for the Michigan Wolverines football team at the University of Michigan. Meanwhile, the son plays as a defensive end for the Detroit Lions of the National Football League.

Due to the complications from a tetanus shot, Chris had to retire from football and later enrolled at the University of Michigan Medical School to pursue a physician degree. He currently works as a physician at Beaumont Hospital in Plymouth, Michigan.

The mother of the athlete works as an artistic photographer, and her works can be seen on her Instagram profile. Also, Sinkevics shares pictures of her family on her personal Instagram account.