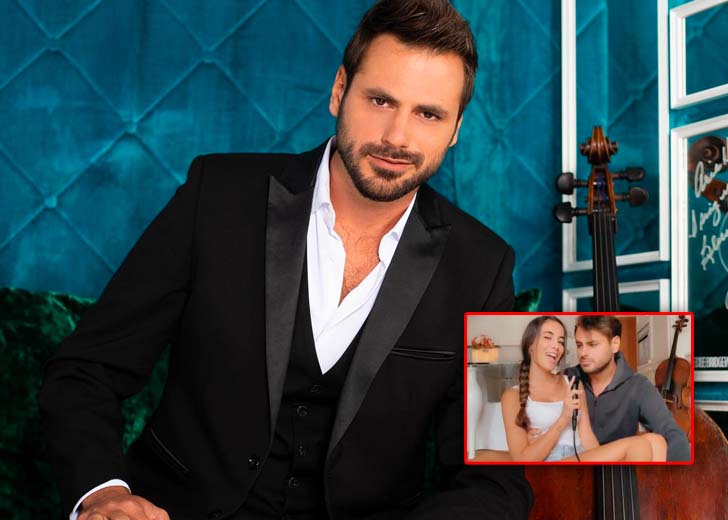 Stjepan Hauser had a great allure with Italian singer, Benedetta Caretta. It was beautiful witnessing a Croatian cellist passionately dueting with Caretta with her remarkable voice.

Unfortunately, the couple does not seem to be together now. There are no photos featuring each other recently on their Instagram.

Moreover, Hauser seems to be dating someone else, as he recently posted a couple of photos and videos with Miss Spain Europe, Irene Garcia Moreno.

However, Caretta and Hauser had been together for a couple of years. Let’s know something about them.

Stjepan Hauser and Benedetta Caretta with their lovely duets

Hauser was prominently seen with the Caretta during the lockdown period. The couple has posted plenty of song covers dueting with each other.

In most of the videos, their lovely bonding could be glimpsed; Hauser played the cello, and Caretta sang the songs on his lap passionately.

He is not only the one who had posted the cover duets together; Caretta, too, had flooded her gram with the duet’s videos. In most of them, the camera was set up to hide her upper face.

On June 15, 2021, she wished her boyfriend his birthday with an Instagram post. It was a video of them where Hauser was playing cello, and she was singing ‘Thousand Years’ by Christina Perri.

She had wished the best things to the cellist and mentioned him as the one who had first believed her.

Fans even speculated about their engagement with this musical duo, as on March 5, 2021, Hauser shared a series of videos and a photo of the moment he seemingly proposed.

Stjepan Hauser proposed to a lady on his knees. (Image Credit: The Focus)

In the photo, he was on one knee proposing to a woman who seemed to be Caretta. There was no official confirmation of their engagement from both of their side.

As he is seen with someone else now, some fans do not seem very happy. In one of the videos he posted with Miss Moreno, one of the users commented, “I like his other girlfriend, the one who was singing with him. She was beautiful and humble.”

In the following post, a cellist with over 3 million followers posted a video playing his cello for Miss Spain Europe in a boat. And his captioning goes as, “Wherever you go, whatever you do, I will be right here playing for you… ❤️🎻.”

Even Moreno has posted a handful of photos with him on her account. Some fan has favored Caretta over her there too.

This is not the first time Hauser’s relationship and breakup have made the headlines. Before he dated Caretta, he was in love with his fellow songstress, Jelena Rozga.

Both of them seemed pretty committed to each other. Still, destiny had a different path for them, they eventually parted in 2017, and it appeared the ways of Hauser and Caretta were different too. We hope they have a great path ahead.

Everything about Comedian Dana Carvey, Wife Paula Zwagerman, and Their Two Kids