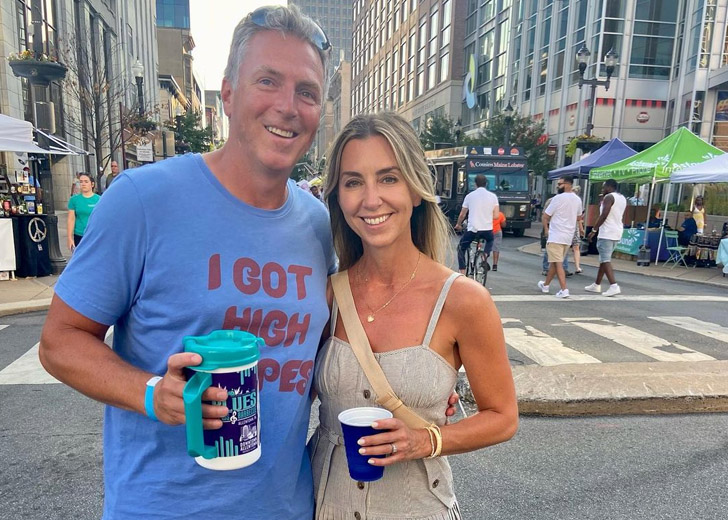 Stacey Stauffer is a well-known TV personality, news anchor, and keynote speaker who has captured the hearts of millions of viewers for more than 20 years. She is adored for her upbeat, energetic, and genuine sense.

She spent more than six years working at QVC, where shoppers frequently choose a variety of goods.

One of the most well-liked hosts on the network was Stauffer. She could make you feel like you needed to buy something even if you didn’t.

Following her career breakthrough at QVC, many people were interested to know more about her personal and marital life.

Stauffer married Larry, an US Air Force employee, around April 2010. Not only did she have luck in her work, but she also had luck in her personal life by marrying such a kind and gentle soul.

However, there is not much information regarding their wedding ceremony, although it appears they wed in a private ceremony surrounded by their family and friends.

The TV anchor uploaded a sweet photo of her and her husband, Larry, sharing a passionate kiss on April 18, 2021, in honor of their 11th wedding anniversary.

She wrote, “Even after 11 years, every kiss feels like this! ❤️ Happy anniversary Larry, xo.”

Furthermore, on June 9, 2022, Stauffer uploaded several photos on her Instagram with her hubby lounging on the beach and spending quality time together.

She wrote a brief yet lovely message that described their strong relationship. “So blessed to have had a few days away with my best guy to reflect, relax and renew,” the former NBC host expressed.

Stacey Stauffer is a mother

Stauffer is the proud mother of two young boys, Ben and Larry Jr. She initially had no interest in having children and didn’t think about it when in high school, college, or even after she hit 30.

In an Instagram post, the TV star admitted that she did not swoon over infants and did not even love holding them.

She revealed, “I just didn’t think about it one way or another. But God had a plan for me.” She thought there was nothing better in the world the moment her first son, Ben was born, and that feeling was only confirmed when her second son, Larry, was born.

Nevertheless, Ben appears to be her first kid from a prior union. Stauffer uploaded a photo of her husband with their children on the occasion of Larry’s 46th birthday along with the caption, “We love you Big Larry and are so blessed to have you as husband, dad & other-dad!”

A close look at Stacey Stauffer

Stauffer has won the hearts of millions of viewers for over 20 years as a renowned TV personality, news anchor, and keynote speaker.

The news anchor is a true brand ambassador and aids businesses in making innovative products into enduring family favorites, thanks to her success in cultivating fan devotion.

Stauffer has been in front of the camera all her adult life. Before securing her dream position as a news anchor in Philadelphia, her native market, she began her career as a broadcast journalist in numerous TV cities.

The TV personality spent over ten years covering important breaking news and international events for NBC and FOX stations. She had to choose to leave her loved career to achieve a better work-life balance, even though she enjoyed every minute of it.

Her years of experience and skillful storytelling ultimately helped launch her into a lucrative career as a well-known host for QVC, America’s top home shopping network.

Stauffer applied for QVC in 2013 while juggling her personal and professional obligations. She outperformed 10,000 other candidates for the coveted host role because of her vibrant personality and upbeat approach.

She oversaw thousands of hours of unscripted, live programming, acted as a spokesperson for hundreds of national businesses, and assisted in creating on-air marketing plans for well-known global brands like Apple, Dyson, and KitchenAid.

The anchor’s passion for recommending exceptional items led her to launch her own food and lifestyle brand. She now successfully connects brands with their audience and converts viewers into paying customers.

Aspiring TV personalities have turned to Stauffer for advice because of her expertise and sincere style. She guided and trained famous people, aspiring inventors, and businesspeople at QVC to make TV sales.

Nevertheless, people were in disbelief when news of her termination from her position with QVC started circulating online. The decision, which allegedly formed part of a more extensive network makeover, has undoubtedly upset many regular QVC watchers.

Advertisement
Related Topics:LarryStacey Stauffer
Up Next

Are Wilmer Valderrama and Amanda Pacheco Husband and Wife?

Inside Topher Grace’s Wedding and Relationship with Wife Ashley Hinshaw