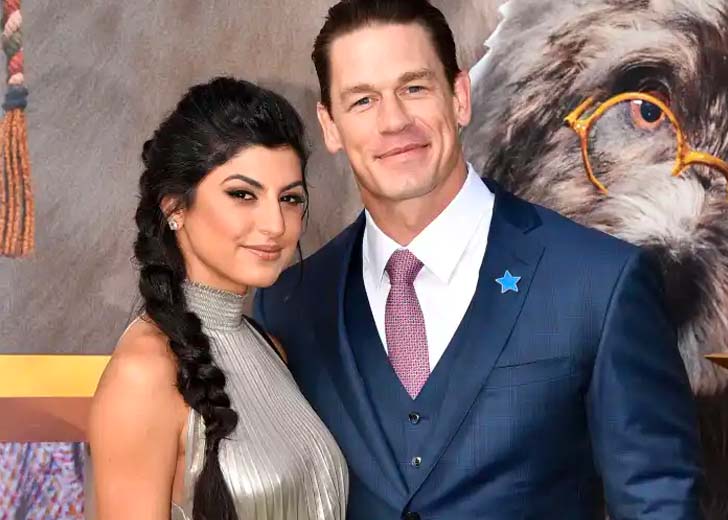 Cena married Shariatzadeh, with whom he had been dating since the beginning of 2019, in a private ceremony in Tampa, Florida, on October 12, 2020.

Before getting married to Shariatzadeh, the actor was married to Elizabeth Huberdeau. The pair got married in 2009, and their relationship ended only after three years in 2012.

Shariatzadeh is the first woman Cena was linked to since Nikki Bella, a fellow wrestler Cena almost married after dating for over five years.

John Cena and Shay Shariatzadeh met at a restaurant

Before getting married, Cena and Shariatzadeh dated for one and a half years. He had a love-at-a-sight experience when he first spotted her while filming at a restaurant in Vancouver.

She was dining with a group of female friends at the time. The wrestler stated, “There was one woman I was looking at and I couldn’t take my eyes off of her… that’s when it started,” in an interview with Entertainment Tonight.

The couple started dating in early 2019. In March 2019, while Cena was in Canada to film Playing with Fire, the couple was first seen enjoying a romantic dinner date in her hometown of Vancouver.

She traveled in to meet him while the two were maintaining a long-distance relationship when his next project required him to go to San Diego.

The WWE Champion was such a gentleman, as he was seen escorting her back to the airport by himself after their extended weekends together and giving her a heartfelt kiss before they parted ways.

In October 2019, when Cena’s movie Playing with Fire had its premiere, the couple made their red carpet debut together.

John Cena and Shay Shariatzadeh are contemplating their next step

Nearly two years after being married, Cena and his wife’s romance has intensified, and they are now discussing what to do next. He has been open about whether or not he sees little wrestlers in the couple’s future.

An insider exclusively said, “He said for so long that he didn’t want kids but now he’s warming to the idea more and more,” to Us Weekly.

However, during a January visit on The Drew Barrymore Show, Cena confessed that it was difficult to manage the time he needed to run himself properly.

The Playing With Fire actor is “wonderful” with kids, according to host Drew Barrymore, but he added that he wasn’t sure if parenting was right for him.

He also admitted that one has to have “passion and fuel” before entering fatherhood.

The wife of WWE star Cena is exactly as accomplished as he is. Shariatzadeh resides in Vancouver but was born in Iran. However, her exact date of birth is not known yet.

Beginning in December 2019, she worked as a product manager for the enterprise software business Sonatype in Canada.

According to her LinkedIn profile, she previously worked at Motorola Solutions, where she studied thermal cameras and video intercom systems.

Shariatzadeh attended the University of British Columbia in 2008 and graduated with a bachelor’s degree in electrical and electronics engineering in 2013.

When she was younger, a project her brother brought home from engineering school sparked her interest in the profession.

According to her LinkedIn profile, Shariatzadeh has experience working as a sales associate at Guess and La Vie En Rose and engineering. She maintains a low profile and is not active on social media.