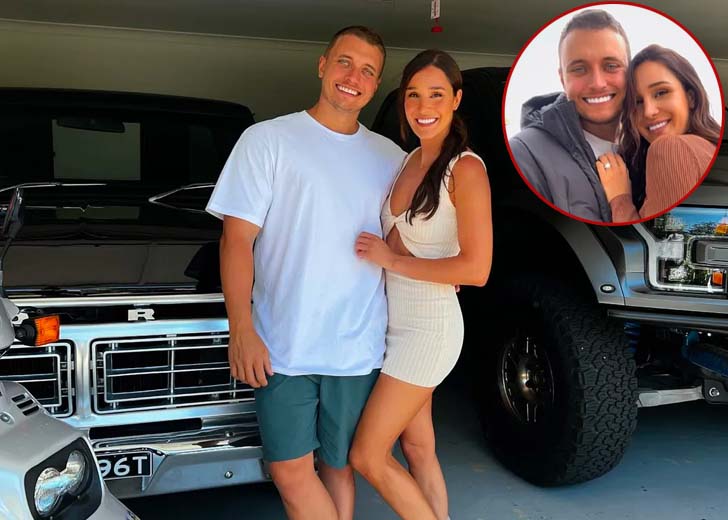 Kayla Itsines, widely recognized as the Australian fitness YouTuber, got engaged to her boyfriend, Jae Woodroffe.

On July 18, 2022, the couple announced their engagement through their Instagram handles. In their posts, Woodroffe was seen putting on the sparkling ring on Itsines’s finger.

In her post, Itsines wrote, “YES!!!” along with heart-eyes and ring emojis, and a hashtag engaged.

On the other hand, her boyfriend of six months posted a picture that showed the ring even closer. He captioned the picture, writing, “When you know, you know.”

The fitness trainer was quick to reply to him in the comment. She wrote, “I love youuuuu…it’s perfect!!!!” Likewise, others congratulated the couple, while wishing them for a better life.

On January 27, 2022, the couple made their relationship Instagram official. At the time, Itsines couldn’t stop her happiness and revealed that Woodroffe had been on her side as her best friend for numerous years and now as her boyfriend.

Despite making the official announcement in January 2022, the pair had been dating each other for nearly a year. As per online reports, they began their romantic relationship around August 2021.

Speaking of Woodroffe, he manages a very private life, due to which not much information is known about him. That being said, he is reportedly 29 years old and his mother’s name is Jenny.

In addition, his Instagram profile hints that he loves traveling and cars.

And he is presently living with his partner and her daughter Arna, whom she welcomed from her previous relationship. But he also wants to have his own children with the fitness trainer — he revealed during an Instagram live back in May.

Just like Itsines, Woodroffe was also involved in a relationship in the past. he dated a woman named Lauren Belotti for a long time.

The two were together for around eight years, starting in 2012. Apart from being a couple, they were also business partners. They together launched Bikini Body Training Company, currently SWEAT.

Their business grew along with their family. In 2018, the couple launched the SWEAT app, which led them to build a combined net worth of more than $696 million.

In 2018, they even got engaged and, after a year, they experienced their first parenthood. They welcomed their first child, a daughter named Arna Leia Pearce, via C-section.

But their relationship started going south, and soon they announced their break up. The two shared similar sentiments regarding their daughter, saying that she will always be their first and foremost priority.

How To Get A General Trading License: 6 Useful Tips

Posted on July 1, 2022July 1, 2022
Trading industries have different types, having multiple businesses in the field of trading products and goods.
Read More