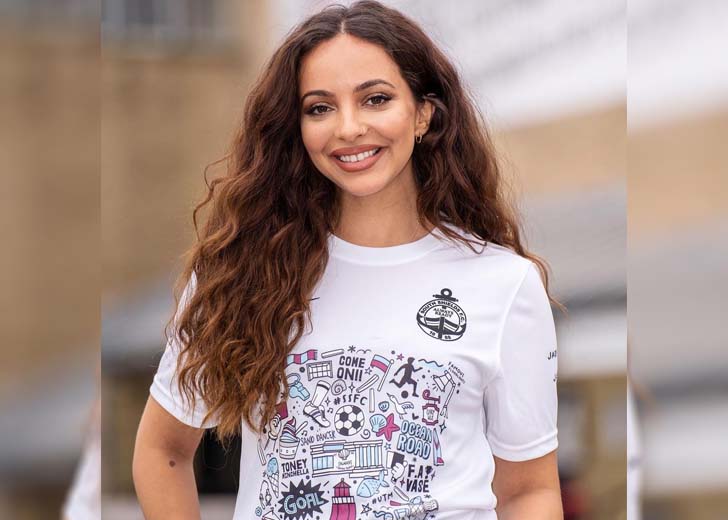 Jade Amelia Thirlwall, commonly known as Jade Thirlwall, is an established British singer and songwriter who came to fame after winning the eighth season of The X Factor as a member of the girl-only group Little Mix.

She is still with the same group, which presently consists of group members named Perrie Edwards and Leigh-Anne Pinnock. Previously, Jesy Nelson was also a part of the group, but she left in 2020.

Coming back to Thirlwall, she has earned great success in her professional career, and the same could be said of her current personal life. She has been in a romantic relationship with her actor boyfriend for some time now.

Who Is Jade Thirlwall’s Boyfriend?

Additionally, he has participated in several reality TV shows and has been hosting the show, Don’t Hate the Playaz since 2018. He is also a member of the English hip-hop duo Rizzle Kicks, alongside Harley Sylvester.

Born in 1992, he celebrates his birthday on January 25 every year. He is 29 years of age now and goes by the nickname of Rizzle.

As for his parents, his father’s name is Herman Stephens, and his mother’s name is Emma Boulting. His mother once worked as an actress. Furthermore, his maternal grandfather is the late director-producer John Boulting, who had won a BAFTA Award for his work.

Thirlwall’s romance with Stephens first emerged during the first phase of the COVID-19 lockdown in May 2020.

The Sun reported that the singer had been messaging the actor during quarantine and finally met in person on May 18, 2020. A source told the outlet:

“Jade has been open to dating for a while now but it can be hard to find the time to meet people usually. While stuck at home she started messaging Jordan and they have been getting on but it’s still really early days.”

The source continued, “They met up for a walk on Tuesday afternoon to chat and get to know each other which was nice but nothing has happened between them yet. With the lockdown in place, they can’t so much as kiss so they will have to take things slow.”

A month later, the two were spotted in London at the Black Trans Lives Matter protest. Some fans had taken a picture of them from behind, in which Stephens’ arms were around Thirlwall.

Finally, she confirmed her relationship with Stephens when she sat down in an exclusive chat with the American drag queen RuPaul on October 27, 2021, which was published by Cosmopolitan.

She then confirmed her relationship when she referred to Stephens as her boyfriend. She said, “When I first started talking to my boyfriend [actor and musician Jordan Stephens], I discovered he did a movie where he played a drag queen and I was like, right, that’s it.”

“He’s perfect. Sign me up! A straight man who’s willing to dress in drag and loves being queer and feminine,” she further added.

The romantic couple, who prefer to keep their love life low-key, recently moved in together, around the same time she confirmed her relationship. During a conversation with Metro.co.uk, she mentioned moving in and said:

“Anyone who has supported you through hard times is really important. It’s quite special seeing that. It’s the one positive to come out of this. Me and Jordan… we are a good match. We are so chilled out, we are horizontal!”

Furthermore, they recently completed one year of the first time they had a conversation. On her Instagram story, she had shared a picture with her boyfriend and wrote, “1 year since I slid in the DMs.”

Thirlwall and Stephens’ togetherness is going super well, and it seems like the couple will be together for a long haul.

Before dating her present boyfriend, Thirlwall, age 39, was in a couple of relationships in the past.

In 2012, she began dating former Britain’s Got Talent winner Sam Craske. However, just a few months later, rumors came in suggesting that Thirlwall had allegedly cheated on Craske.

The rumors weren’t confirmed, and the couple’s relationship continued until they officially parted ways in 2014. Their busy schedules were cited as the reason behind their split. Though broken up, they were spotted getting out of a club in 2015.

But, it seemed like there was no romantic connection between them at that time. Later, in the same year, she formed a romantic relationship with Jed Elliott, an English bassist.

The two’s togetherness seemed strong as they continued to be together for several years. However, this relationship also wasn’t meant to last forever as they broke up in July 2019.

At the time of their split, DailyMail cited that the now-former duo parted ways “after spending time apart in different countries due to their hectic work schedules.”

“There is honestly no big drama, it has just sadly run its course. They spent so much time apart as Jed is on tour constantly in the USA with his band The Struts. And obviously Jade is super busy with Little Mix promo – and about to start a massive LM5 Tour,” a source further told the outlet.

Facts about Lupita Nyong'o's Parents, Height, and Net Worth

Inside Lily Collins’ Age, Parents, Height, and Net Worth