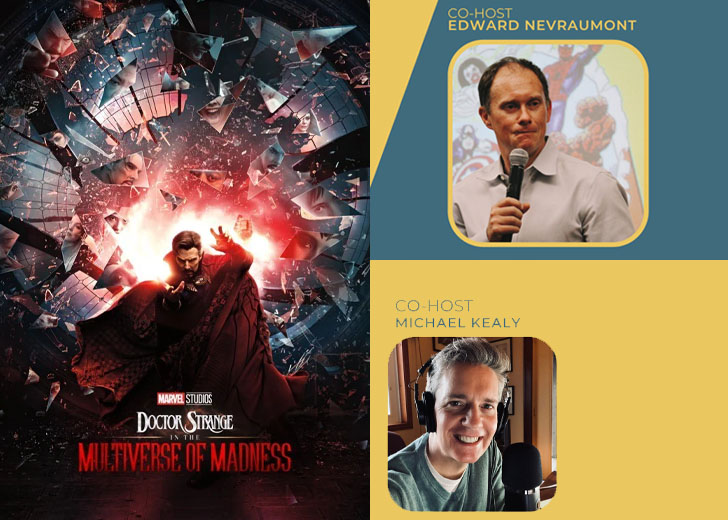 “Remember Doctor Strange was not originally created as a Superhero at all,” Mike says.

Marvel movies have become the pinnacle for American culture and have ultimately evolved into a cult-like niche while producing a multi-billion dollar list of major successful blockbuster movies. Marvel’s latest film is the highly anticipated adventure/fantasy film, Doctor Strange in the Multiverse of Madness, and is debuting in early May.

In fact, the official movie trailer for Doctor Strange was just released on YouTube and offers up tons of drama, action, and adventure. So much so that it has millions of comic book and Marvel movie fans around the world left with tons of questions and predictions!

But how much does this latest movie match up with Stan Lee’s original famous comic books? We sat down with Marvel comic book and Marvel movie experts and hosts of the Super Serious 616 Podcast, Mike Kealy and Edward Nevraumont, to discuss the movie and how it all does, or doesn’t, tie into the original Marvel comic books from the 1960s.

Break it down for us Normies — Did a lot of the Doctor Strange plots and themes from comic books make it into this latest film? Is this film the perfect primer if you’re looking to explore Marvel comic books?

Doctor Stephen Strange first appeared in Strange Tales #110 in 1963. His was originally a stand-alone “mystic” story tacked on at the end of a Human Torch comic to fill space. He wasn’t even mentioned on the cover. It wasn’t until a year later that Stan Lee began incorporating the character into the broader Marvel Universe.

While we don’t know the entire plot of this movie just yet, it seems that the film is very loosely based on the original Dr. Strange story. In fact, it is more based on Wanda’s story of trying to get back to her children. It seems the Marvel Comic Universe has taken that story, changed it considerably, and then made Dr. Strange the protagonist.

The trailer for Doctor Strange in the Multiverse of Madness just came out — there is so much to unpack, but what about it is really interesting to you? Tell us why you’re pumped about this film?

Mike: A few things about this film:

(1) It was supposed to come out BEFORE Spider-Man: No Way Home, which debuted in 2021. So all the multiverse stuff from the Spider-Man film was supposed to follow from the “Madness” that will start in this movie. Because the order of the films was switched, the plot of both movies had to be changed to “make sense.” It will be interesting to see how much of the original plot is still showing through in this film.

(2) Even more so than Spider-Man, this film is set up to do a lot of fanservice. The fact that the older Spider-Man appeared in No Way Home was the worst-kept secret in Hollywood, but at least they pretended they were trying to keep it a secret. This time they put Patrick Steward (as Charles Xavier) in the trailer. Given that they are not saving Professor X from the Fox X-Men movies, the question is, “what surprises ARE they saving for us?”

Iron Man died in Avengers right?? There are rumors of Tom Cruise as Iron Man, as well as a variety of actors who could play him, including Reed Richards. Lou Lou Ferigno as the Hulk? It seems unlikely, but who knows what Easter Eggs they drop?

What superpowers does Doctor Strange have and some speculate that he is one of the best superheroes in the entire Marvel universe — What do you think?

ED: “Magic” is his superpower. Magic is a bit of a catch-all in the comics. It allows Doctor Strange to do just about anything the writers need him to do. Meanwhile, if the writers need to NOT have him able to do something, they can do that too. There is always an excuse as to why magic does not work the way you want it to.

Mike: Remember Doctor Strange was not originally created as a Superhero at all. He existed in his own corner of the Marvel Universe doing his own thing battling other sorcerers and extra-dimensional demons. While other heroes were battling villains in New York, almost all of Doctor Strange’s adventures were hidden from view.

How did you guys originally get started to produce The Super Serious 616 Podcast?

We’re college friends and after loving Marvel comic books and the films for quite some time, we decided to start a podcast to discuss them, but in a way, no one ever has before. Instead of talking about the issues directly or interviewing writers and artists, we wanted to try something a little more unique.

The premise of the show is that the two of us live IN the Marvel Universe in the early 1960s. Our show is a “commentary on the news of the day” – specifically the “super and supernatural news of the day.”

We read each issue and take notes on what the public would know about the situation. In each podcast episode of The Super Serious 616, we theorize about what is happening that is not public, and we explore the ramifications of what we do know about the wider world.

What is the impact of Monstro destroying lower Manhattan? What does it mean for the residents when Dr. Doom moves the Baxter Building into space? How do Stark Corp. shareholders feel about having Iron Man on the payroll? What impact is the appearance of Thor having on modern religions?

Generally (with some exceptions) each episode covers a single Marvel Comic. We started at the very beginning with Fantastic Four #1 (Nov 1961) and issue by issue, worked our way forward through each Marvel comic book. We produce two short (~10 minutes) episodes per week. We have published more than 150 episodes and are now almost at the end of 1964 in “comic time.”

Some people were worried that we would run out of new things to talk about, but that certainly hasn’t happened yet! One recent episode was all about what we know (in the real world) pertaining to how time travel would work (in the fictional world).