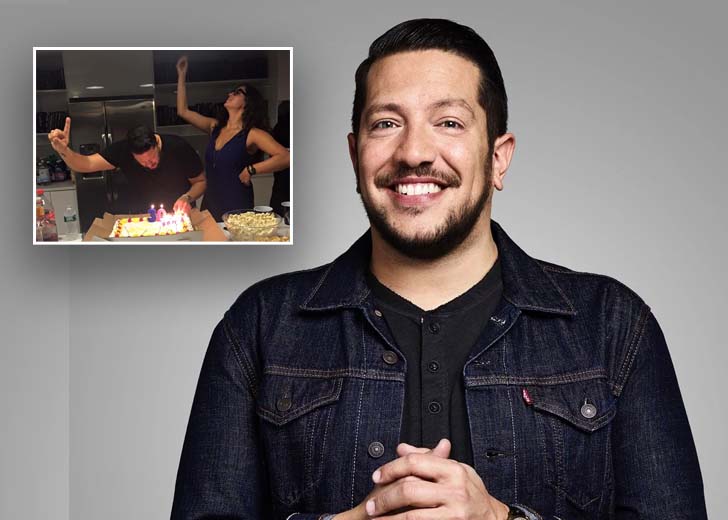 All about Sal Vulcano’s love life!

Salvatore Edward Anthony Vulcano, most commonly known as Sal Vulcano, is a renowned improv and stand-up comedian and actor. He initially gained fame as one of the members of the comedy troupe called The Tenderloins.

Later on, the New York City native won the hearts of millions after starring in the TruTV reality TV show Impractical Jokers — it first aired on December 15, 2011. He stars alongside Joe Gatto, James Murray, and Brian Quinn in the show.

In most of his live shows and TV shows, Vulcano could be seen sharing multiple things about his life with an extra spice of jokes and humor. However, regarding his love life, the comedian has primarily remained private.

As a result of his privateness, people have been forced to speculate whether he is dating a girlfriend or not. Some rumors have gone as far as to declare Vulcano as gay. But, what’s his actual relationship status? Let’s find out!

Is Sal Vulcano married to a wife?

As mentioned earlier, Vulcano’s personal life was completely in darkness, and it wasn’t known if he was dating a girlfriend or married to a wife. However, that changed after the comedian appeared on the Robert Kelly’s You Know What Dude! Podcast in June 2019.

During his appearance, it was revealed that Vulcano was engaged at the time. Host Kelly also talked a little about Vulcano’s fiancee and mentioned she is one of the “sweetest and nicest” people she has ever met.

“Yeah, she’s terrific,” Vulcano also gushed a little about his partner. Additionally, another guest on the show, comedian Eleanor Kerrigan called Vulcano’s fiance “an amazing dancer,” to which Vulcano gushingly replied, “Aww, thanks!”

Besides that, no other details were shared by the three of them about Vulcano’s love life and partner. But later that year, it was revealed that Vulcano had shared the wedding vows with his fiance.

On December 14, 2019, a fan of Vulcano who had attended the comedian’s live show in Boston revealed the detail via a Tumblr post. The fan wrote, “Saw our boy live last night in Boston. First of all: his show was excellent. Definitely go see him if he is anywhere near you.”

After that, they went on the details of his marriage and wife as they wrote, “Secondly: he was wearing a wedding ring and confirmed that he is now married.” The fan then mentioned that Vulcano’s wife’s name was Francesca Muffaletto.

“He said that he and Francesca have been seeing each other for about eight years now and are very happy; he loves her – you can clearly tell in the way he talks about her. I am super happy for him. May they have many happy years together,” the fan concluded his post.

A fan’s Tumblr post about Sal Vulcano being married to a wife (Photo: Tumblr)

When the fan posted this, many were shocked as Vulcano isn’t the one to share details about his romantic life. “I can’t believe he would say that. I thought he wanted to keep it private,” another fan wrote under the original post.

Soon another fan popped into the conversation and went into the details of how Vulcano went on to share the details about his married life and wife. They wrote, “An audience member yelled out something about the ring. He acknowledged that yes, he was married.”

The fan then wrote about how Vulcano mentioned he usually prefers to keep things private, but he only decided to talk about it as the topic was brought up. The fan continued, “He just talked briefly about how long they have been together (8 years).”

“And how much he loves her – that kind of thing. Everyone cheered for him, and that was that on the wedding topic. He did say she [Francesca] was there – I didn’t stand up and try to look or anything.”

Sal Vulcano decorating a cake as his wife Francesca Muffaletto stands beside him (Photo: Facebook)

So, that might do it. Vulcano is currently married to a woman named Francesca Muffaletto. However, there aren’t many details about Muffaletto, and only her Facebook profile could be found, where she had shared a picture with Vulcano in January 2017.

As for when the engaged couple got married, it seems like they tied the knots on September 8, 2019. As per reports, Muffaletto had mentioned she was looking to celebrate an event on the said date, per a wishlist registry under her name on the Williams Sonoma website.

Before it was revealed that Vulcano was engaged and then married, there were huge talks of the actor and comedian being gay. And it all started thanks to Vulcano himself.

During his appearance on the Daytime Talk Show with Sally Jessy, the comedian seemingly came out of the closet as gay. Moments after he came out as gay, his close friends James Murray also came forward as gay.

“You see, I am not gay, but I knew if I said I was gay, he’d admit he was gay,” the comedian further added.

The topic immediately spread like wildfire, but it turned out to be yet another joke from Vulcano. It was later revealed that neither Vulcano nor Murray was gay, and it was just another one of Vulcano’s impractical jokes.