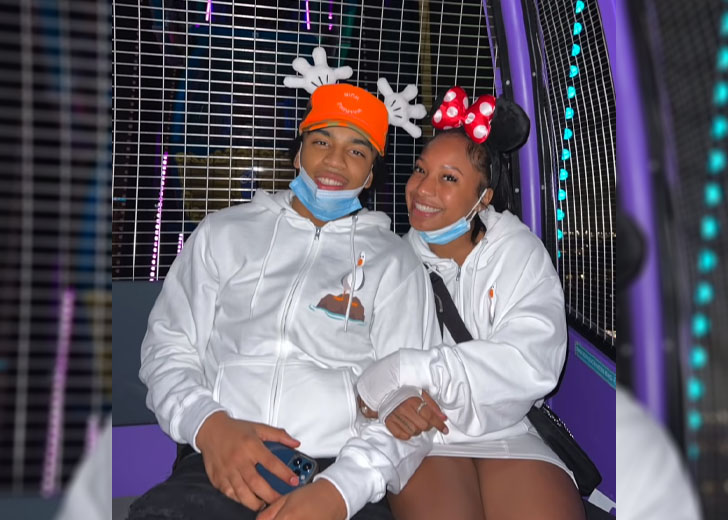 American rapper Jay Cinco has garnered quite the fame thanks to his rap-genre songs. Some of his most popular songs are ‘Ghetto Angels,’ ‘Hood Confessions,’ and ‘Neva Fold.’

In addition, he is a YouTuber who runs a self-titled YouTube channel. In his channel, he uploads his songs and various types of content, such as vlogs, challenges, Q&As, pranks, and more.

Currently, he has managed to amass over 256,000 subscribers and 15 million views on his channel.

While his professional life has given him quite the success, Cinco is currently getting attention due to his personal life — particularly due to his relationship with fellow YouTuber Brooklyn Frost.

The video seemingly confirmed their relationship as the two had also shared a kiss in it. On her YouTube video of April 13, 2021, Frost officially mentioned Cinco as her boyfriend when she titled her video “BOYFRIEND RATES MY FASHION NOVA OUTITS!!! *FOR OUR DATE*”

As months passed, the couple were seen together more often than usual, featuring each other on their respective social media handles as well as YouTube channels.

In a YouTube video of October 7, the two revealed how they first met each other. They mentioned that they met in January 2021 and began dating each other in the following month, in February.

Everything was seemingly going well between the couple and both of their fans were also happy with their togetherness. However, little did everyone know that bond wasn’t going to last forever.

But after dating each other for almost a year, in late November 2021, the two announced their breakup. Both of them have given their respective views on why their relationship ended by uploading separate videos [Cinco and Frost] on their respective channel.

Since their split, both of them have either deactivated or deleted their Instagram handles. The reason behind it might possibly be the former duo’s fans bashing them.

How Old Is Jay Cinco?

As per multiple online outlets, Cinco is currently 18 years of age and was born on December 14, 2002. However, recent events might say otherwise.

On November 28, 2021, the rapper’s now-former girlfriend, Brooklyn Frost, uploaded a YouTube video in which she stated her side on what led to the end of her relationship with him. In the video, she alleged that Cinco has been hiding his real age.

In the video, titled THE TRUTH …, she said that Cinco is one year older than what his age has been reported. In addition, she said that he is currently 19 and will turn 20 in a couple of weeks.

“I’m not going to say what age he is because I don’t want to expose that type of situation,” she ended her statement on that topic.

On the same day, Cinco responded with a video of his own, in which he mentioned that no one has said his exact age on the internet, at least not by himself. “I like to keep a certain level of privacy,” he further added.