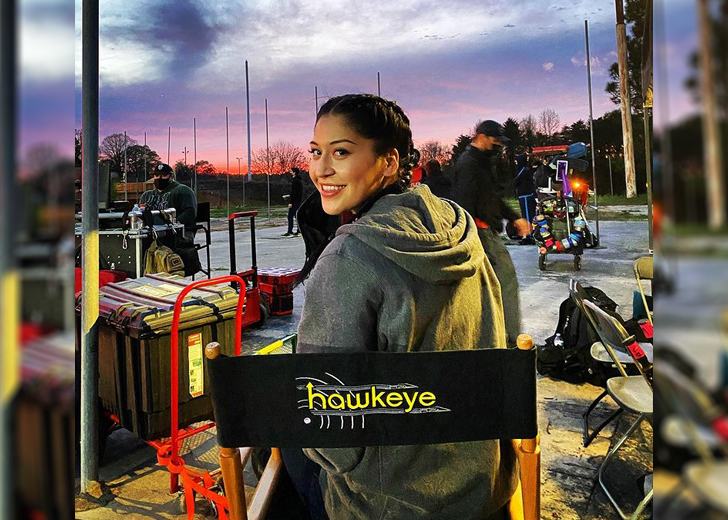 Alaqua Cox is a newbie Native American actress who has soared up to fame for her upcoming Marvel role as Maya Lopez aka Echo in the Disney+ TV show titled Hawkeye. The show will air on November 24, 2021.

Not only that, on Friday, November 12, 2021, Marvel made an announcement that Cox will have a spin-off series of her own titled Echo. The announcement was made alongside several other Marvel’s Disney+ shows during Disney Plus Day.

The character of Maya Lopez aka Echo in the Marvel comics was born deaf – just like Cox is deaf in real life – who later becomes a superheroine. She has the ability to copy every motion that she sees.

In addition, she is the adoptive daughter of the Marvel villain Wilson Fisk aka Kingpin. Currently, not much is known about Cox’s portrayal of the character in the Hawkeye show as Marvel prefers to keep their projects a secret until it comes out.

How Old Is Alaqua Cox?

The Hawkeye star is currently 24 years of age. Cox recently celebrated her 24th birthday on this year’s February 14th.

On her special occasion, she took to her Instagram handle to share a picture of herself in a restaurant in North Carolina, drinking a pina colada. She captioned the picture, “Enjoying my birthday weekend with 2 pitchers of pina colada in North Carolina.”

Born in 1997, Cox was raised in the suburbs of Menominee Indian Reservation, Wisconsin. She is a native American. As per her date of birth, her zodiac sign is Aquarius.

Coming over to her education, she attended Wisconsin School for the Deaf.

The former Amazon employee is the daughter of Bill Cox and Elena Cox. Currently, there aren’t many details available about her parents. Alaqua has kept most of their details under the wraps.

As mentioned earlier, Alaqua was born deaf. However, it hasn’t stopped her from reaching great heights. And, neither has her prosthetic lower right leg.

As per reports from outlets, Cox stands at an average height of 5 feet 5 inches or 1.65 meters and weighs around 55 kg or 121 lbs. Her body measurements are 34-28-40 inches. Her other physical attributes are a slim body, brown eyes, black hair, and more.

Is Alaqua Cox Dating Anyone?

The Echo actress is presently in a long-term relationship with her handsome boyfriend. However, Cox is yet to disclose the name of her partner, though she has shared many pictures alongside him.

The duo’s relationship officially began in mid-2017. Currently, it is unknown under what circumstances Cox and her beau met each other. They fell in love and began dating.

As time passed, their love for each other grew more and more, which further strengthened their bond. On January 15, 2020, the actress shared a picture alongside her partner which also happens to be her first Instagram post.

Through the caption, she mentioned that it has been two and a half years since they have been dating and yet her partner still makes her blush, laugh, and “smile more over the stupidest things.” The caption ended with her writing, “I love you.”

Since then, Cox has only shared a limited number of pictures alongside her boyfriend on her social media handles. It looks like she has been keeping her romantic life away from the media.

Before Cox was hired to portray the role of Maya Lopez aka Echo in the Disney+ series Hawkeye, she had no previous record of acting. The only time she had acted was during a play in high school, that too as a background actor. To say, she had no acting experience at all.

At the time Marvel was casting people for the role of Maya Lopez, some of Cox’s friends learned about it and informed her. After thinking for a while, she decided to go for it.

Recalling the moment, the actress said to People, “They saw the casting call looking for a Native American actress and female deaf actress. It just matched so perfectly, so I decided to go for it.” “I had never seen anybody on the screen that maybe looked like me … deaf, an amputee,” Cox added.

Sometime after she did the auditions, she received a call saying that she got the role. When she informed her parents, they were very much overjoyed. Cox said, “My dad actually cried, and it is rare to see my dad cry. My mom got the champagne — everybody was so excited.”

When Murphy’s Multiverse asked Hawkeye producer, Trinh Tran, what convinced Marvel Studios and its president, Kevin Feige, to give the role as well as a spinoff series to Cox, Tran’s answer was a delight to read.

She first said that Cox is “such a bada** in this [Hawkeye] series.” continuing her statement, she said that Cox has incredibly impressed everyone through her performance and her determination to make sure “Maya Lopez is the way everybody wants.”

In addition, she said that there was indeed some nervousness at the start as Cox wasn’t a part of the industry. “To get somebody brand new and pull her into a character like Maya Lopez, it’s a big deal. But she took it in strides, worked hard, and proved to us that there is a character who’s deaf but is able to be a part of the MCU and be a superhero in her own right,” Tran concluded.

Well, going by all of the praises that the native American actress has been receiving, one thing is certain that her portrayal will be a delight to watch in Hawkeye as well as the Echo series.

You can watch Alaqua Cox in her acting debut as Maya Lopez in Marvel’s Hawkeye series, premiering only on Disney+ on November 24. As for her spinoff show, Echo, it is currently in pre-production.