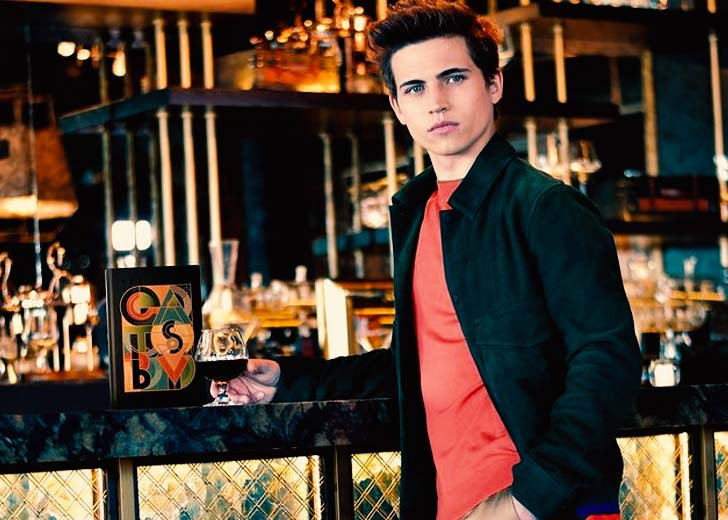 Tanner Buchanan has been a star in the making with acting credits in several hit TV shows and a few known movies. In recent times, he has garnered the limelight for his portrayal of Robby Keene in the Netflix show Cobra Kai (2018-21).

In addition, he has gained a healthy amount of fame for another Netflix gig, a movie titled He’s All That — an updated remake of the 1999 film, She’s All That. He played the role of Cameron Kweller, with Addison Ray as Padgett Sawyer, Rachael Leigh Cook as Anna Sawyer, and others.

However, these two Netflix gigs have not only provided him with enough fame but also allowed people to wonder about his personal life. He has been linked to his Cobra Kai co-star, Mary Mouser, and his He’s All That co-star, Addison Rae.

His dating rumors with Rae got fired up when the two co-stars locked lips during the MTV Movie & TV Awards in Summer 2021. Despite the kiss, it has been reported that the two are nothing more than friends and co-stars, and the same goes for the rumors with Mary Mouser.

That said, does Tanner Buchanan have a girlfriend?

Who Is Tanner Buchanan Dating?

The Designated Survivor star is presently in a romantic relationship, but it’s not with any of his co-stars. However, she is an actress.

Tanner Buchanan’s gf is Lizze Broadway, whom he has known since his childhood days when both of them lived in Ohio. The two started dating each other when Broadway was only 11 years of age.

Their love story continued as they attended the same high school. Though their high school days ended, their love for each other never ended. As the year passed, their bond became stronger and stronger, which is still strong to this date.

Buchanan and his girlfriend have now been together for several years; however, they have always preferred to keep their love life low-key. They rarely share pictures alongside each other via their social media handles — they also aren’t much active on social media.

Besides, they have even deleted all the pictures they had posted previously. Presently, there is only one Instagram post in which the actor has mentioned his partner. The post dates back to November 9, 2017.

He had shared a picture of his floor where petals of roses and lit candles could be seen. He had captioned the picture, writing, “What you do when the person you love comes to visit. @lizzebroadway.”

In addition, they only make occasional appearances in public places. In July 2019, Broadway accompanied her boyfriend at the Comic-Con together when all the Cobra Cai cast was there. Later, their experience was shared via the duo’s joint YouTube channel, Lizze & Tanner.

Going by all of that, it seems like the two have been relishing their relationship days while keeping their privacy.

Tanner Buchanan and Lizze Broadway Briefly Broke up in 2015

Despite all of the goodness in their relationship, a time in 2015 led the couple to part ways for a brief time.

During Buchanan and Broadway’s appearance in the Unqualified podcast in August 2021, they told the host, Anna Faris, that they had briefly parted ways sometime in 2015. And as per the actor, it was his behavior that led Broadway to split with him.

He told Faris, “I will admit, it was my fault. I was actually kind of being an a** during that time. So she had every right to [break up with me].” “I don’t know what was inside of me that felt like I could act the certain way that I was acting, but I did anyway. Then I was devastated,” he further added.

During his split with Broadway, he watched The Fault in Our Stars “on repeat” to cope with the pain of the breakup. Later, Buchanan gave his girlfriend an ultimatum that obliged Broadway to take him back.

As Broadway told in the podcast, “He gave me an ultimatum and I was too afraid to lose you [Buchanan]. You’re like, ‘I can’t talk to you anymore if we don’t get back together.’ As much as we didn’t know about ourselves, I knew you.”

Fortunately, their love for each other was strong enough that they couldn’t remain apart. Everything worked out fine eventually, and the two have been together ever since.

Nonetheless, in late 2020, the duo had sparked breakup rumors when both of them deleted the pictures they had shared alongside each other on Instagram. But, the rumors seem to be false as they are still together — despite the deleted posts and Buchanan’s kiss with Rae.

Just Jared confirmed their togetherness in July 2021 when the love birds were photographed sharing a kiss in Venice. In the next month, the actor did an ‘Actually Me’ segment for GQ Magazine’s YouTube channel, in which he mentioned Broadway as his girlfriend.

He had responded to a fan’s question on Quora, in which the question was, “Does Tanner Buchanan have a girlfriend?” Replying to that question, he said, “Yes, I do. Her name is Elizabeth Broadway. Most people know her as Lizze Broadway. And she’s absolutely wonderful.”

Furthermore, their appearance as a couple in the above-mentioned Unqualified podcast in August 2021 also clarifies that they are still together.

Who Is Tanner Buchanan Girlfriend?

As mentioned earlier, Broadway is an actress who started her career doing commercials and voiceovers. She made her acting debut in 2010, booking a cameo role as Brooks Ryerson in the TV show Southland.

Recently, she was cast as Emma in the untitled spinoff show of the superhero TV series, The Boys. Presently, she has 21 credits as an actress in her IMDb profile.

Born in 1998, she celebrates her birthday on February 16 every year. She is presently 23 years of age and is around ten months older than her boyfriend, who was born on December 8, 1998.

The Toledo, Ohio native’s birth name is Elizabeth Broadway, and her zodiac sign is Aquarius. Furthermore, she reportedly stands at the height of 5 feet 1 inch (1.55 meters).