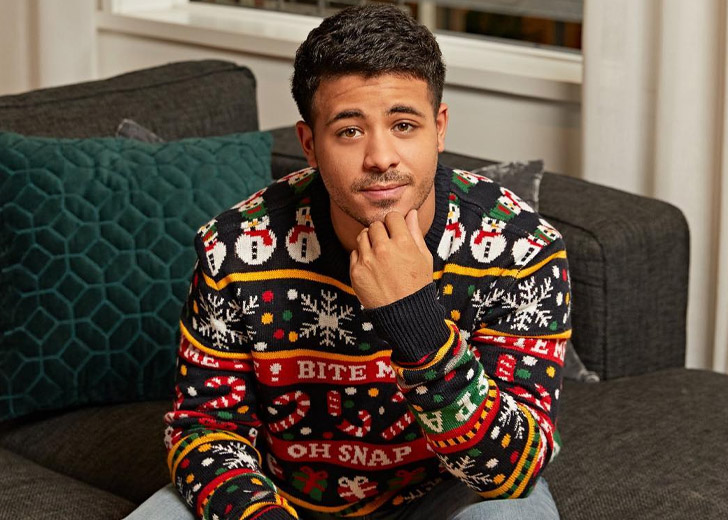 Christian Lee Navarro, aka Christian Navarro, is a talented American actor who came to the limelight for his portrayal of Tony Padilla in the Netflix series 13 Reasons Why. He played the role from 2017 to 2020.

Additionally, he has been a part of other movies and TV shows such as Law & Order: Criminal Intent, Run It, The Affair, Rosewood, Vinyl, The Tick, Bushwick, and Can You Ever Forgive Me?

More recently, he played the role of Father Dante in the horror-thriller movie Prey for the Devil. Due to his latest acting gig, people have again become interested in one of Navarro’s most talked about things, his personal life.

Before discussing Navarro’s personal life, let’s debunk the rumors about his sexuality. There have been speculations that the actor is secretly gay following his performance of a gay character, Tony Padilla, in Netflix’s 13 Reasons Why.

And while Navarro has publicly shown his support toward the LGBTQ+ community in real life, he only plays a gay character in the reel world. Moreover, he had previously expressed his admiration for American boxer Paige VanZant and fellow actress Hailee Steinfeld.

That said, the answer to the questions like “Is Christian Lee Navarro gay?” is Navarro isn’t gay. Now that Navarro’s sexual orientation is clear, is he dating a girlfriend? Or is he married to a wife? First things first, he has never been married.

And Navarro’s fan girls might also be happy to know that the actor is currently single, or so it seems after having a detailed look at his social media handles and other media outlets that have covered his love life.

As of this writing, there are no reports of him having a girlfriend. And even if he has a significant other, he has done a great job keeping his partner and personal life details away from the media and public.

If you look up “Christian Navarro’s wife” on the internet, you might find results suggesting that Navarro was married to actress Traylor Howard from 2003 to 2006. And that information is true as well as false.

As for how it is true, Howard was married to a man named Christian Navarro. However, the Christian Navarro she married isn’t the same man as the 13 Reasons Why star. So, there became confusion as the two men shared the same name.

If we go by the current looks of Navarro’s personal life, the only plausible conclusion is that he is relishing his singlehood and probably focusing on his career. However, his relationship status wasn’t always single, as he had the companionship of some ladies in the past.

The 5 feet 3½ inches tall actor, who hails from New York City, was initially in a romantic relationship with American actress Shazi Raja. Her full name is Alina Sheherzad Akhtar Raja, and she has appeared in High Maintenance, Salvation, and God Friended Me.

As per multiple reports, the now-former couple started as friends, with Raja humorously calling Navarro her brother in one of her Instagram posts of 2015. However, things changed in a year or so as the two began dating.

And on August 21, 2016, she even posted a sweet birthday wish to her then-boyfriend and referred to him as “baby.” Unfortunately, their sweet romance lasted only for around a year, as the two split in 2017 due to unknown reasons.

Navarro later confirmed his break up in May 2017 during one of his interviews with PopSugar. He said, “I’m single! [My ex-girlfriend] and I separated a few months ago, and I’m single and doing my thing.”

Two years later, in 2019, Navarro began dating a model named Kassidy Ramirez. He first introduced his new girlfriend via an Instagram post where he wrote, “I’m healthy. I have a wonderful family, beautiful friends, a new love, my amazing pup, my art, and my love for all of you.”

As Navarro and Ramirez got along more, they began sharing pictures alongside each other on their respective social media handles. Additionally, they went on a vacation to Maui, where they stayed at Four Seasons Resort Maui at Wailea.

Things started to look more official after the actor took his model partner to the premiere party of Netflix’s 13 Reasons Why season 3 in August 2019. However, this relationship also didn’t turn out well, and the two eventually broke up.