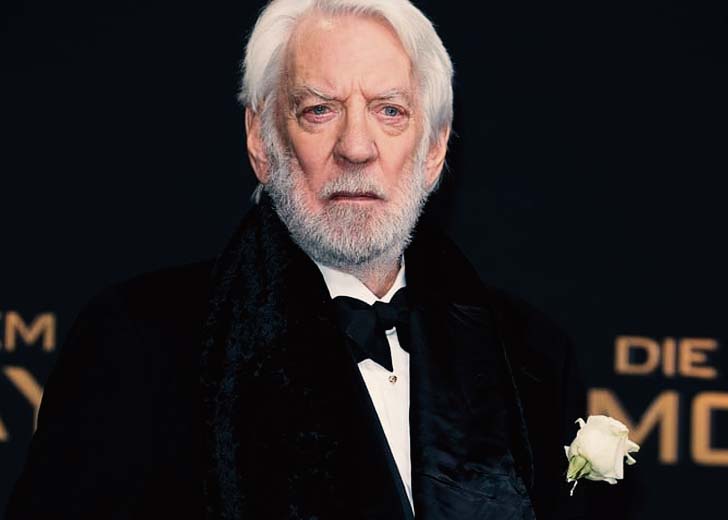 Donald Sutherland is a veteran actor from Canada who has made his way to the top of the entertainment industry. Audiences have now seen the actor in almost 200 acting gigs, and nearly every one of it loved by the viewers.

In addition to his acting gigs, people worldwide have seen the actor with a few ladies, too. But, he hasn’t had quite the luck with the ladies during the start. As of this writing, Sutherland has been married thrice and divorced twice in his life.

Here is a look at all of his three marriages, starting with his present one!

Sutherland has been in a long-time marital relationship with his third and present wife, Francine Racette. His wife is a 74-year-old French Canadian actress who was born in Québec, Canada.

The now-married couple first met each other in 1972 on the sets of the Canadian pioneer drama titled Alien Thunder. Just sometime after meeting each other, they decided to get hitched and shared the wedding vows in the same year.

Since they got married, the couple has always been together and is now regarded as one of Hollywood’s longest-lasting duo. In March 2008, he was asked by The Guardian if it’s luck that he married the right woman or has he worked at it.

In reply, he said, “I don’t know… It’s not something that you can communicate. She’s an extraordinary human. She was courted by intellectuals. Jean-Paul Sartre? She was his actress. She was Frédéric Rossif’s muse.”

The actor then quoted a line said by actress Joanne Woodward “Beauty goes and sex goes but my husband makes me laugh every single day.” After ending the quote, he added, “And so does my wife. We laugh all the time.”

Together, Sutherland and his wife Racette are blessed with three sons: Rossif Sutherland, Angus Redford Sutherland, and Roeg Sutherland. The veteran actor named his three sons after the directors he previously worked with.

Donald’s sons, Rossif and Angus, have been an active part of the entertainment industry. On the other hand, Roeg has only been a part of one acting gig, and it seems like he prefers something other than acting.

As mentioned earlier, Sutherland was married twice before his marriage with his present wife.

His first marriage was with Lois ‘May’ Hardwick, a child star of the silent movies. Sutherland met his first wife at the university they attended. They dated for a while before walking down the aisle in 1959.

The two were married for seven years before calling it quit in 1966. In their marriage, they weren’t blessed with any children.

They tied the knots in 1966. When he was married to her, the couple had welcomed twins; a son named Kiefer and a daughter named Rachel. Sutherland named his son after the director of his film debut, Warren Kiefer (pen name of Lorenzo Sabatini).

As per The Guardian, Douglas was in pursuit of radical politics and was even arrested once for collecting money to buy hand grenades for the Black Panthers.

Sutherland and his second wife’s relationship seemed promising, especially after they welcomed children; however, it wasn’t meant to last forever. The pair split after only four years of marriage, in 1970.

But, not long before his marital relationship with Douglas ended, he already had an affair with actress Jane Fonda. As per the actor’s interview with The Guardian, he and Fonda were already together before they starred together in the 1971 movie Klute.

“We got together shortly before we made Klute,” he told the outlet. He also stated that everything was going great until “the relationship exploded and fell apart in Tokyo.” They had a three-year-long affair and ended things after that.

“And it [split from Fonda] broke my heart. I was eviscerated. I was so sad. It was a wonderful relationship right up to the point we lived together,” Sutherland further added to The Guardian.

At the time of their affair, Fonda was married to her first husband, Roger Vadim. They got married in 1965 and parted ways in 1973.