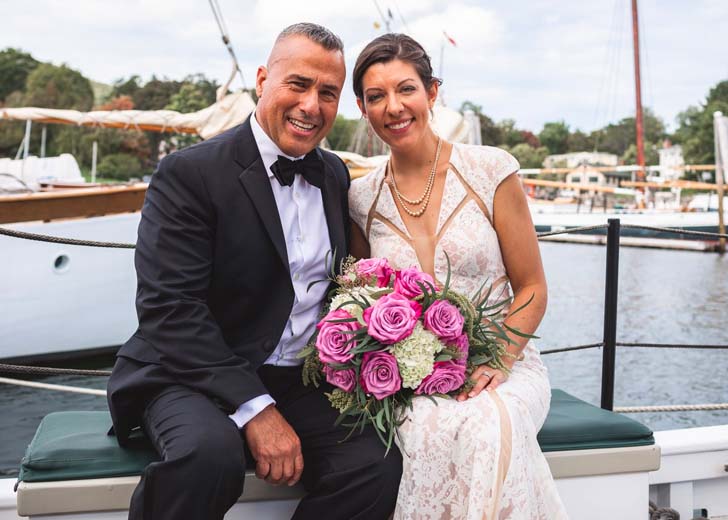 Sending our well-wishes to the Frattini family.

Naked and Afraid XL star Charlie Frattini recently suffered a massive stroke resulting in serious medical complications. Thankfully, his wife, Emily Gorecki, was there to stand by his side in his serious times.

The TV personality and former Marine Corps’ medical condition worsened after December 17, 2021, when he had COVID-induced atrial fibrillation and pericardial effusion. As a result, he had to spend several weeks in the hospital.

A slight improvement in his health was seen on January 8, 2022. However, just three days later, on January 11, 2022, Frattini collapsed at work from what is said to be a massive ischemic stroke.

The stroke caused extensive irreversible brain damage and left-side paralysis, after which he was admitted to Portland’s Maine Medical Center and confined to the Neurological ICU. It was reported that he had to stay in the hospital for several more weeks.

In late January 2022, Knox Village Soup reported that Frattini was left with “extensive irreversible brain damage and left-side paralysis” and that his longtime girlfriend turned wife, Emily Gorecki, was holding on to hope.

As Frattini was to stay at the hospital for an extended period and potentially required long-term care, Gorecki decided to start a Go Fund Me page, where $71,420 has been raised out of the $200,000 goal. On the page, it was said:

Medical expenses will continue to pile up for Charlie’s current care and potential for long-term care. We are asking for help to get Charlie and his family to a safe, accessible home for his new abilities and for help on his evolving lifelong medical journey.

It added, “While we cannot predict what life has in store for Charlie as his journey continues, we can ensure his safety, comfort, and best care.”

Additional help came from the locals of their community and other people who raised money through charity and auctions. 40 Paper, a restaurant Frattini and Gorecki often visited, organized a fundraiser on March 26. They donated all of their bar and dining room sales from that day to the Frattini family.

Charlie Frattini with his wife Emily Gorecki on their wedding day (Photo: Facebook)

Similarly, on May 14, 2022, another fundraiser event was organized at Rockport Opera House, Rockport. The event was a benefit dinner and silent auction organized for Frattini’s medical expenses and for Gorecki to start some alternations at their house.

Gorecki had intended to make some alternations to their house and complete some renovations after knowing her husband’s medical condition. The alternation would make their home accessible and allow Frattini to live there and exercise his skills in the best way possible.

Frattini seems to be recovering and doing well now. On June 1, 2022, he posted a video on Instagram where he was in a wheelchair and learning to walk again with the help of a professional.

On the next day, he shared another update where he revealed that he was at the Main Medical Center at the time to get his cranyotomy fixed. “They put my skull back today this morning at 5 AM,” he added in his caption.

“I’m recuperating hopefully that’ll give me a little boost in cognitive performance with my stroke. I have pictures of the actual operation putting my brain back of my skull back on my brain anybody want to share it privately only.”

On June 6, Frattini posted a picture in which he was still at the hospital. In the photo, he was seen in a wheelchair and about to have his breakfast. Below his wheelchair was his dog named Newton.

Similarly, the next day, he shared another photo, this time of the red temporary parking license of his wheelchair. “Well, it’s official. I can park anywhere now,” he wrote in his caption.

Since then, the construction expert hasn’t given any updates on his health. Nonetheless, it only fits fine to assume that he is doing fine and recovering. And supporting him on this journey is his life partner.

Talking more about the couple, they have been together for a long time. On September 29, 2019, Frattini and Gorecki shared the wedding vows near a dockyard with family and friends in attendance. Since then, their bond has been more impeccable than ever. As of now, it doesn’t seem that they have any kids.

The married couple currently lives in Thomaston, where they do restoration works. They moved there in 2016 after spending a long time in New York City, where Frattini served in the Hi-rise building construction market.