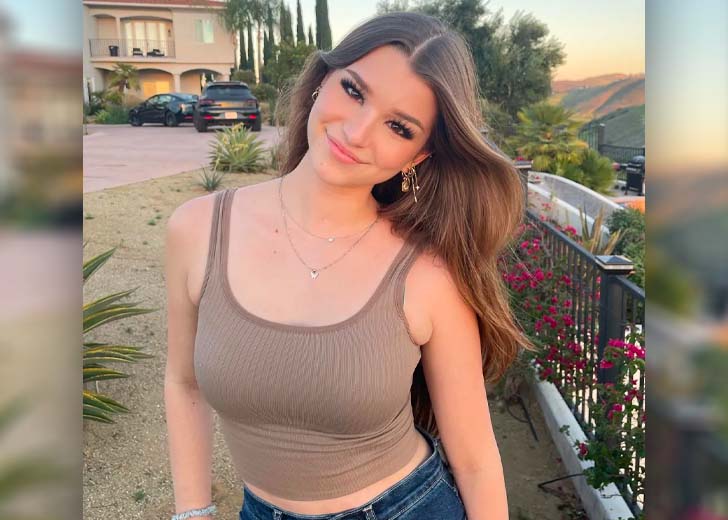 “I am beginning to think this is the reason why my parents told me not to show my face on the internet,” said Brooke.

Brooke Monk is a TikTok star and social media celebrity born and raised in America. She is well known for her short lip-sync and dancing videos on the TikTok app under the handle @brookemonk.

She has millions of fans on her many social media accounts. She also has a self-titled YouTube channel with a good amount of subscribers.

She has 22.1 million followers on TikTok alone, and her subscribers count to a whopping 1.42 million on YouTube.

She is also well-known for her resemblance to Brooke Hyland from Dance Moms. The TikTok star has got quite famous at such a young age. But, popularity comes with its own pros and cons.

Brooke Monk reacts to the Reddit page dedicated to her feet

The TikTok star has definitely got that early success, but exposing your daily life and personal information to the internet comes with its own risks, one the stars are willing to face.

One such drawback of social media exposure is trolls, memes, and hate comments.

Monk knows what it’s like to be popular, and she deals with her heaters very gracefully, for which her fans adore her.

The internet has its dark side, and Monk had to deal with it. As a matter of fact, she found out that there is an entire page on Reddit dedicated to her feet where creeps post pictures of her feet and write weird comments.

She found out about it through the comments on her TikTok videos. She then released another video where she reacted to the news and was in shock.

Brooke Monk claps back at her trolls in a sarcastic way

It’s not only her feet the creeps on the internet fantasize about. There are a lot of memes, creepy posts, and trolls on different media like Reddit that people have edited or snapped from Monks videos and posted with weird captions on them.

And Monk has decided to deal with them in her own fantastic way. By reacting to them through her different social accounts.

In one of her YouTube videos titled ‘REACTING TO REDDIT FANTASIES ABOUT ME,’ she uploaded back on October 18, 2021, she reacts to her trolls in a very subtle yet sarcastic way.

She even exclaims, “oh my gosh, I am beginning to think this is the reason why my parents told me not to show my face on the internet.” She adds ‘it’s these people.”

Brooke Monk and her boyfriend, Sam Dezz, react to the Reddit posts together

Monk again posted another video following the first one, on December 27, 2021, reacting to creeps’ Reddit fantasies, this time with her boyfriend. It was titled ‘MY BOYFRIEND REACTS TO REDDIT FANTASIES ABOUT ME.’

Monk is dating Sam Dezz, another famous TikTok creator and model. They are seen reacting to Monks trolls on Reddit. Although they seem to be taking it in a fun and light way on the video, internet trolls and hate/negativity has become a major problem.

Posted on July 4, 2022July 4, 2022
Students who develop close bonds with their instructors perform better than those whose relationships with instructors are problematic.
Read More