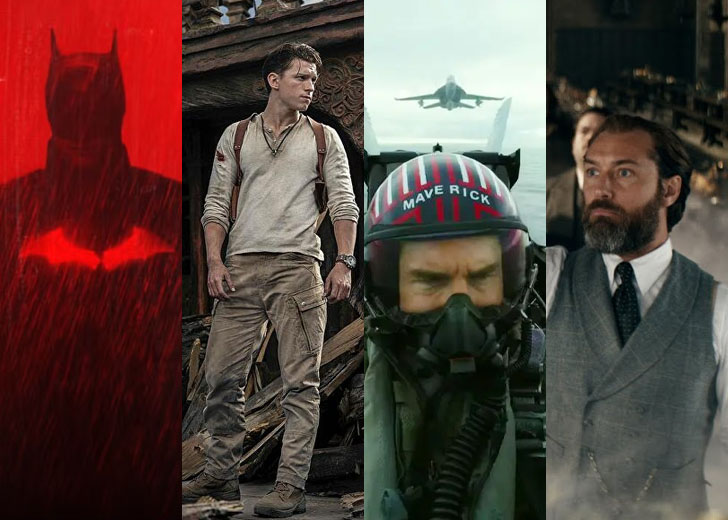 You, surely, don’t want to miss out on them!

Because of the issues caused by the COVID-19 pandemic, many movies have been delayed, and they haven’t been released as scheduled.

This is why the end of 2021 was a very busy time for Hollywood, and 2022 will be very similar. Let’s have a look at the most anticipated movies of 2022 — some that are already out and others that we are still expecting.

This movie is already out and is already very loved by the public. You will see beloved stars like Jessica Chastain, Penelope Cruz, Sebastian Stan, and others in it.

The director is Simon Kinberg, and he created a phenomenal spy thriller. An evil mercenary has stolen a destructive weapon that can put the whole world in danger. A group of professional female agents will have the mission to catch the mercenary and recover the weapon.

Another movie that is already out and you can stream on Netflix. As the name suggests, the action takes place in Munich, Germany, just before the start of the Second World War.

It shows the story of two friends that are now rivals since they are on the two opposite sites of the government. However, they see that the only way to expose Hitler and put a stop to his plans is to work together once again. You will see brilliant actors like Jeremy Irons and Neville Chamberlain.

We all love streaming platforms because the content is available to watch from the comfort of our homes. We can immediately put the titles we expected for a long time and enjoy them. There are many streaming services and websites for streaming free movies. You can find a lot of new movies or old favorites to rewatch because you can’t get enough of them.

You can watch this thriller on HBO MAX, and it is one of the movies that Worner Bros are releasing specifically for this streaming platform. The movie tells the story of an agoraphobic tech worker who works as an analyzer of feeds from people’s conversations with KIMI — a smart device just like Alexa that you can ask whatever questions you want.

Zoë Kravitz plays the main character, and she believes that she becomes an involuntary listener of a crime.

We will be able to see Jennifer Lopez in another romantic comedy, this time in the company of Owen Wilson and Maluma. The rom-com story is about two very famous stars that are supposed to get married, but Kat Valdez (Jennifer Lopez) catches her future husband Bastian (Maluma) cheating on her just before the wedding.

This is why she decides to marry a complete stranger from the public of her concert/wedding, and she chooses  Charlie Gilbert (Owen Wilson) — a math teacher that didn’t even go but did it for his daughter. Will they fall in love? Watch the movie to find out. And this is the movie debut of Maluma, so one more reason not to miss it out.

If you like the Indiana Jones movies, then this one is for you. Tom Holland will play the main character Nathan Drake that we know from the popular video game series with the same name as the movie.

It is an action-adventure film that will take us on an extreme adventure that will keep us on the edge of our seats till the end. We will see other stars like Mark Wahlberg, Antonio Banderas, and Tati Gabrielle in the movie.

We will never have enough of the troubled vigilante that protects Gotham. This time the cape will be worn by Robert Pattinson, and it is rumored that this Batman will be the darkest by now. The director Matt Reeves that we know from “Planet of the Apes,” will show us another take on the never-ending fight between the Bat against the Penguin and the Riddler. We will enjoy seeing Zoe Kravitz in this title as well.

This film is about a scientist who suffers from a very rare disease, but while trying to find a cure and test it on himself, he starts turning into a vampire. Jared Leto will play the main character, and we are excited to see the story of maybe the first modern vampire.

‘Fantastic Beasts: The Secrets of Dumbledore’

We can never have enough of the magical world of Hogwarts and Harry Potter. This year we will enjoy the third part of the “Fantastic Beasts” movie series, and we will learn more about the beloved character of Dumbledore when he was young. We will see our favorite Newt Scamander again and hopefully a lot more new adorable magical creatures.

We almost can’t believe that after 30 years we will see another Top Gun movie. Tom Cruise will come back to play the role of Maverik, and his friends Iceman will be played by Val Kilmer. We will also see Goose’s son played by Miles Teller. We are excited to see what phenomenal maneuvers we will see this time from the now much more experienced pilots.

‘Minions: The Rise of Gru’

And let’s mention something from the little ones, but not only. The adorable yellow creatures will be back! We will see again the minions and this time the young Gru. We loved the previous animated movies, and this one will probably explain how the minions met their master Gru.

And many, many more…

There are so many other great titles that we can expect in 2022 that we can’t just mention all of them. Some of them will be on the big screen, and others we will see directly on the streaming platforms like Netflix, HBO MAX, Amazon Prime, and others. One thing is sure — there will be a lot of movies to enjoy in the following months.