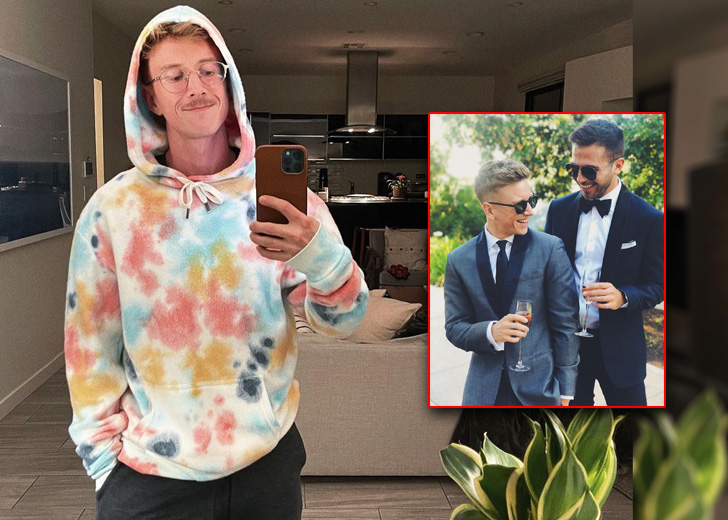 Mathew Tyler Oakley, famous known as Tyler Oakley, is an openly gay American YouTuber. He is best known for his content on YouTube and activism towards the LGBTQ community and various other social issues.

Speaking of his personal life, he has been linked to a few gay personalities in his life. Similarly, one of his confirmed relationships was with Anthony Russo, a product manager at Netflix.

But, is Oakley still together with Russo?

The Michigan-born internet personality confirmed his relationship with Russo back on September 8, 2018, via an Instagram post. He shared a picture of himself and Russo, in which they were wearing stylish suits. The caption of the post suggested that they were at a friend’s wedding.

Distractify later reported that the couple first met each other in 2018 through the online dating app, Bumble. After talking over the app for a while, they reportedly met face-to-face and subsequently began dating each other.

After making his relationship Instagram official with Russo, both of them began to share several pictures alongside each other on their respective social media handles. On 2019’s New Year’s Eve, Russo shared a picture alongside the YouTuber.

In the caption, he mentioned that Oakley was the best thing that ever happened to him in 2018. “the best part of 2018,” he had written.

The constant sharing of pictures alongside each other as well as the caption of the posts clearly depicted that the two had developed a strong bond.

However, their relationship seems to have gone south presently, as they reportedly broke up. Neither Oakley nor Russo has shared anything related to each other recently.

Although nothing has been officially confirmed now, the disappearance of Oakley in Russo’s and Russo in Oakley’s social media handles has hinted at their split.

Before being in a relationship with Russo, Oakley was linked to the former American figure skater Adam Rippon.

The speculations of them dating began after Oakley featured Rippon on his YouTube video of February 6, 2018. The talks got fueled when the former skater shared a picture with the YouTuber, with a flirty caption.

However, all of the rumors got silenced once Rippon announced his relationship with Jussi-Pekka Kajaala — they got engaged in February 2021. Similarly, some months later, Oakley began dating Russo.

Apart from Oakley’s rumored relationship with Rippon, there were also gossips about him dating Troye Sivan, an Australian singer-songwriter, in 2014. But, there came no confirmation.

Oakley’s coming out of the closet story goes back to his high school days. In the beginning, he came out in front of his friends, mother, and stepfather. All of them were really supportive and respected his preference.

The only person that he had to open up was his biological father. However, it wasn’t that easy. Oakley told People in March 2018, “He [his father] came from a more conservative background, a more religious background, that leaned a little bit less supportive of gay people.”

One night, his father invited him over for dinner, where he asked the YouTuber if he was gay. Oakley didn’t deny and said “yes.” After hearing the truth, his father offered to pay for his conversion therapy.

Oakley said, “I look back and I realize that homophobia can really disguise itself as concern. And that concern, [my dad] thought it was out of a place of love.”

Oakley refused the said conversion therapy. Instead, he consoled his father and stepmother. As time passed, his father understood and accepted his son as he is. Now, his relationship with Oakley has greatly improved.

Are Neal McDonough and Robert Ri'chard Father and Son? Here's the Truth!