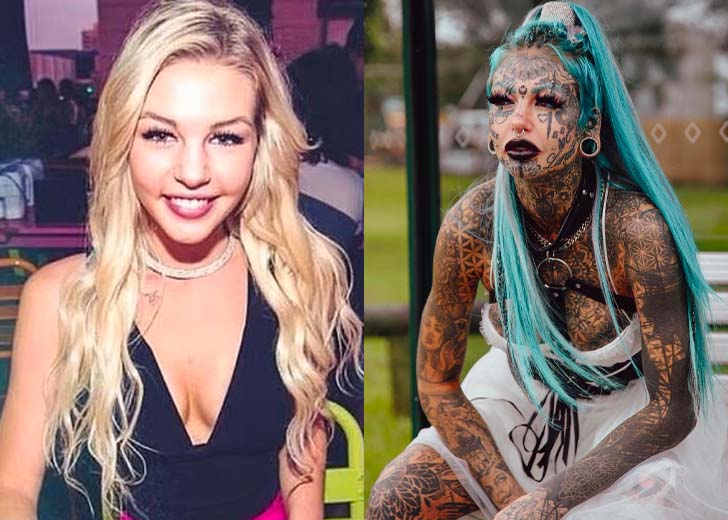 Every inch of Amber Luke’s body is inked!

Many people in the world are obsessed with tattoos, piercings, and body transformation. However, at times, some take it to the next level.

One such person is Amber Luke.

One glance at Luke shows that she is obsessed with tattoos and has undergone surgeries to aid her body transformation. She has inked almost every part of her body, including her eyeballs.

Similarly, she has undergone various modifications, like fillers, augmentations, and surgeries to split her tongue. All in all, Luke is a fascinating person to look at.

That being said, many wonder why Luke inked herself and modified her body to such a point that she is unrecognizable from her past self. Here is everything we know about Luke, her tattoos, body transformation, and the reason behind it.

Why did Amber Luke get so many tattoos?

To date, Luke has spent thousands of dollars getting her body inked. And it all started when she was a child.

Being born as the only daughter of her parents, Luke was lonely growing up. Her mother was a single working mom, and her father was not present in her life.

Being lonely and alone took a toll on her mental health. As a result, Borderline Personality Disorder with Schizophrenic traits appeared along with depression and anxiety.

Soon she became suicidal and attempted suicide. According to The Sun, she has made 15 documented attempts at suicide.

But soon, she decided to change her life around. She wanted to learn how to love and accept herself.

And tattoos and body transformation were her answer. She got her first tattoo when she was 16, and it felt “like home” to her.

Initially, she sought it because she wanted to know what the sensation felt like, and she wanted it despite not knowing what it felt like. But the feel of needles piercing her flesh made her comfortable and familiar.

Soon, she fell in love with it. The change in her attitude led to her increase in tattooing at the age of 20.

She claimed that she genuinely felt the bad energy leave her body by the minute when she was getting inked. She used to loathe herself and hate how she looked, but it changed after she started getting tattoos.

Luke has hundreds of body art, but she noted that she stopped counting them when she reached 150. However, she estimated that she has since added at least another 100 to her collection.

Amber Luke has over 200 tattoos after undergoing an extreme body transformation. (Source: Twitter)

Every inch of her body has some art, but she does not intend to stop. The most extreme transformation Luke has done is getting her eyeballs tattooed.

She has revealed various times that getting her eyeballs inked blue was one of the most painful experiences in her life, but it was worth the pain.

She even has a silicone implant in her eye that makes her look like a “pixie.” The extreme transformation made her blind for three weeks, and Luke dubbed her experience “pretty brutal.”

However, looking at herself in the mirror and seeing her favorite color in her eyes when she wakes up in the morning makes her happy.

Tattoos are not the only body transformation Luke has got. She has gone under the knife in several instances, like breast job, cheek and lip fillers, pointed implants in her ears, and split tongue.

Where is Amber Luke now?

According to the Daily Mail, Luke reportedly sobbed in court on May 4, 2021, even though she had previously avoided jail time for cocaine trafficking.

After sealed packages of marijuana, MDMA, and other drug-related paraphernalia were seized in Luke’s Capalaba house during a police search. As a result, she was convicted guilty of seven narcotics counts.

However, according to her defense attorney, the MDMA discovered in her house was for personal use, and the major reason for the marijuana trafficking was to fund “her addiction.”

Additionally, her attorney emphasized that it wasn’t meant to be used as criminal proceeds. Despite the massive number of medications being peddled, Judge Michael Williamson expressed empathy for her suffering with mental health concerns.

Luke was therefore sentenced to three years of immediate parole rather than a prison term so that she may access therapy. Currently, she is active on social media — primarily OnlyFans and Instagram —  and makes content there.