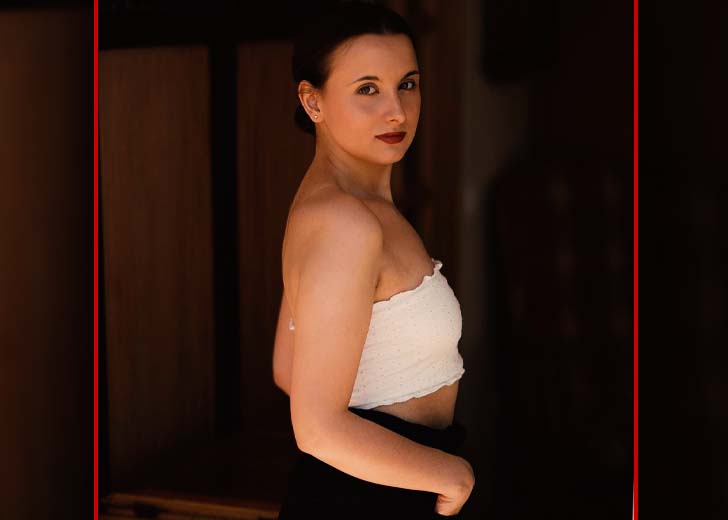 German actress Sarah Jacqueline Patrick, also known as Sarah Petrick, rose to fame with her role in the short thriller movie La Octava dimension in 2018, which became her stepping stone to rebound into the industry.

Petrick seems to have been part of the stage play before acting. Petrick’s appearance was not noticed in any films or movies after her first debuted short movie Armer Ritter in 2009 till La Octava dimension in 2018, showing almost ten years of the gap to bounce back into the acting field.

Parents and education of Sarah Petrick

Petrick was born in 1994 in Germany but later shifted to Barcelona, Spain, for further schooling and training purposes.

After moving to Spain, the actress studied the Ivana Chubbuck technique and the Stanford Meisner technique in an international school in Barcelona and is fluent in German English and has good knowledge of Spanish.

To pursue a career in acting, Petrick attended The Actors Workshop – International Acting School in Barcelona.

Petrick, now 27, seems not to have been open regarding her parents’ name and their occupation as no one seems to have found any information about them, but the search is still on, and hopes that soon Petrick will be open about her family.

Petrick, who has a slender body and cute face, seems to have less than average height when compared with her co-stars or her actress friend.

According to IMDb, Petrick is said to have 5 feet 2 inches or 1.59 m. It could have been a setback for an actress, but Petrick had already passed that phase in 2009 when she received her first acting job.

The actress has a beautiful hazel-colored eye with dark brown hair.

Petrick made her grand entry in the acting industry with her debut short movie Armer Ritter in 2009, at the age of 14.

Before the debut, Petrick had been part of different stage plays like Weihnachtsgeschichten in 2002, Maria & Josef in 2003, and comedy shows including Der Doktor mit dem Koffer and Hausaufgaben in 2005.

Petrick has left her footprints even in being a short video producer named Das Keksvideo in 2012.

Petrick seems to be involved in photography, too, not as a profession but as a hobby. She seemed to have worked as a freelance photographer in Germany and Spain.

Moving back to acting, Petrick’s major work for 2022 would be Uncharted. The shooting has been completed and is ready to be premiered on February 18, 2022, alongside co-stars like Tom Holland, Sophia Ali, and Mark Wahlberg under the directory of Ruben Fleischer.

Petrick’s other upcoming work for 2022 would be The Internationalist, which is in its shooting phase and is expected to be completed by the last week of November and ready to premiere on December 1, 2022, alongside co-stars like Matthew Laird, Sanna Toivanen, and Brittany Field.