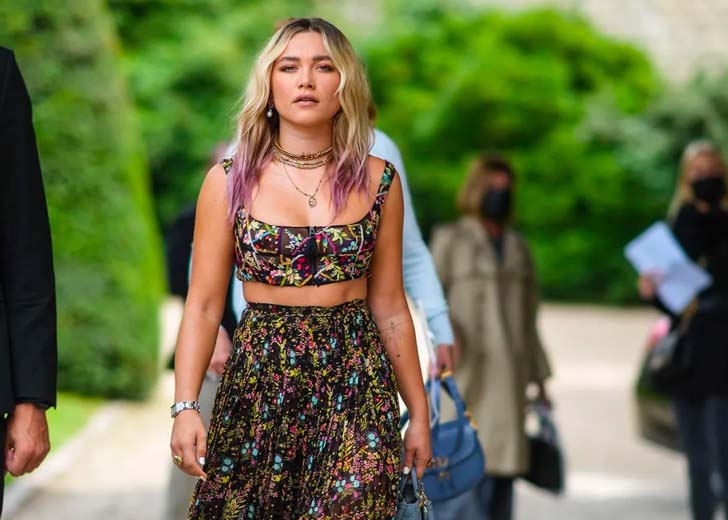 Florence Pugh has a raspy voice.

Florence Pugh rose to international fame in 2019 through her amazing performance as Saraya Knight / Paige in Fighting with My Family, Dani in Midsommar, and Amy March in Little Women.

For her performance in the latter, she even got herself a nomination at several Award shows, including one at the Academy Awards and BAFTA Awards. Pugh then became the heartthrob of millions when she portrayed the role of Yelena Belova in Marvel Studios’ Black Widow.

And if you have been caught up with everything the talented English actress has done in the entertainment industry, you might be familiar that she has a raspy voice, particularly when her character is in moments of distress like her crying scenes in Midsommar.

Florence Pugh is diagnosed with a rare medical condition

When Pugh was on the cover of Vogue Magazine in January 2020, the actress opened up about many things, including the reason behind her raspy voice. During the cover issue, the magazine pointed out that the actress has a worldly and cheerful voice with a rasp.

Pugh revealed that the rasp is due to her childhood illness. Between the ages of three and six, the English actress resided in Spain with her family; her parents, Clinton and Deborah Pugh, and two older siblings, Arabella and Sebastian [when Pugh was seven, she became an older sister to Rafaela].

The Pugh family’s move to Spain was to seek treatment for Florence’s health issues because her family believed that Spain’s warmer weather and air would help her. Later, it was found that the actress was diagnosed with a rare medical condition named tracheomalacia.

It means that her trachea partially collapses after she breathes. And when Florence was just a toddler, she had to pay a visit to hospitals multiple times. But as time passed, her condition became good, and Florence said that she now has “a very scary cough.”

Boston Children’s Hospital further explains tracheomalacia: “This means that when your child exhales, the trachea narrows or collapses so much that it may feel hard to breathe. This may lead to a vibrating noise or cough.”

And due to Florence being diagnosed with tracheomalacia, it was hard for her to film an emotional scene in the 2019 movie Midsommar, where Florence’s character is sobbing hysterically. And during the post-production stage, the tone of her crying had to be amplified.

The 26-year-old actress later gave a little insight into the filming of that scene via an Instagram post on March 10, 2021. She posted a picture from that scene and wrote, “Truly, these women made this scene possible. It was TERRIFYING. As terrifying as it was to watch, it was to read and know we had to do it.”

“I’ve never been an actor that finds it easy to cry on camera, it’s something very personal to me and despite finding all other aspects of acting exciting and thrilling, I find crying very scary, and at some points in my career, directors [have had] to change the scene because I couldn’t do it.”

In the end, Florence credited the sisterhood she found with her co-stars that helped her through that crying scene as she felt safe, loved, and respected. “It only happened because I had them.”

Florence Pugh continues to be extra cautious due to tracheomalacia

During Pugh’s appearance on the Sue Perkins: An Hour Or So With… podcast on July 8, 2020, the actress talked about how she still is extra cautious. Additionally, she said her mother suggested Pugh should return to Los Angeles when the COVID-19 pandemic started.

She said, “I’ve had this breathing thing since I was tiny, so my mum’s always had to be aware of new diseases, new illnesses that could potentially really hurt me. So she’s been kind of barking about this since December.”

“And then when it [COVID-19 pandemic] really got serious, my mom… said I think you should go back to the clean air. I raced back here [Los Angeles], and I’ve just been staying put.”

As the Marvel star went on, she stated that due to her “funky trachea” and “floppy larynx,” she is on a stricter lockdown than other people. She said that due to her medical condition, she often gets sicker than those without it.

As a result, she was cautious and scrubbed everything down in her house. “Well, they’re just a b—h. They’re getting better as I get older. But I’ll tell you what it is. It doesn’t matter how strong I am now. When I was a kid, I was always ill.”

“But now that I’m older, I don’t [easily] get ill, but when I do, it’s the same intensity as it was when I was always ill. So I just have to be really careful. With something like this, I don’t think I’d have too much fun,” Pugh concluded.

Furthermore, Pugh mentioned that when she was a child, she was told there would be trachea transplants in the future. However, she is not sure if she wants to get a transplant and change how she sounds.

And while her diagnosis with tracheomalacia might be painful on some occasions, it has never become an obstacle on her way to rising in the entertainment industry. Besides, she now has become a successful actress with a voice recognizable by everyone.